Charlotte Observer – In Awe of The Last Frontier 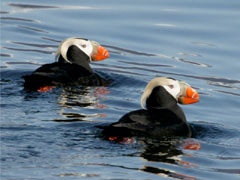 Dash the whale dog seemed to be able to sense their presence before the rest of us. He’d run back and forth on the deck in his orange life preserver – he wasn’t allowed out without it – and get more and more excited. He’d pause, maybe rest his whiskered chin on the gunwale and stare at a distant spot on the water. By and by, the telltale spout of vapor would erupt 20 or 30 feet into the air.

Humpbacks. For a week in May, my wife and I and three other couples were surrounded by whales. If you’re considering a trip to Alaska – and you should if you haven’t been – consider sharing a small boat with friends. You’ll enjoy the camaraderie, have more control over your itinerary and be much closer to the natural wonders of this special place

We were amid whales almost constantly.

Sometimes they were two miles off, sometimes just yards. Sometimes the humpbacks would be traveling with single-minded purpose, like commuters heading home to supper. Sometimes they’d meander like kids chasing butterflies.

Sometimes they’d breach, rising completely out of the water.

Those stories you’ve heard about whales – that their grace belies their size, that to be among them is somehow to sense the hand of God, that they inspire a quiet, almost prayer-like awe – don’t do the animals justice. Your first whale, from up close in a small boat like the Alaskan Song, is far more than that.

In fact, so is all of southeast Alaska.

Between whales, Dash would stand sentinel on the forward hatch, his muzzle into the breeze. We’d often join him quietly. We’d gather with cameras in hand, knowing full well that our pictures and vacation stories would never capture the grandeur and majesty of the waterfalls and glaciers, the snow-capped mountains, the ever-changing panorama of wildlife.

Then we’d be surrounded by a pack of feeding orcas, and Dash would go berserk.

Then we’d break for a meal of halibut or Dungeness crab we’d caught ourselves, and maybe a bottle of French pinot blanc.

The next day we’d do it all again, and spot a bear or three on the beach. 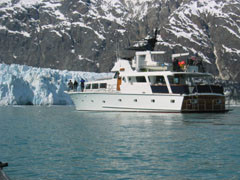 Our trip was organized by our friends, Wharton Winstead and his wife, Kathryn Banks, of Charlotte. The other two couples were from Asheville: the Winsteads’ architect Bill Ashe and his wife, Pat Peterson, and the Ashes’ good friends, Stan Willett and his wife, Patti Claridge.

In other words, we weren’t strangers.

Strangers can be, well, an unpredictable mix, so Geoff and Debbie don’t mix them. “We’ve learned – and we only charter the whole boat,” Geoff said.

Geoff and Debbie, who’ve been chartering in southeast Alaska for more than 15 years, escort lots of extended families. Ten-year-olds sometimes get bored, Debbie said, but the trips regularly include seniors. And Geoff and Debbie can tailor a trip to any group’s primary interest, from whale watching to fly fishing. (Try telling the captain of a cruise ship that you’d like a closer look at a female humpback and her calf, or to sit tight while you make a couple of last casts.)

We flew from Charlotte to Seattle, and then to Ketchikan, Alaska. You can get there in a day. Coming back is tougher, because time changes and airline schedules work against you. We spent a night in Seattle coming back. If there’s a next time, we’ll make it three. What a cool city.

Our trip took us from Ketchikan, up through the Inside Passage to Glacier Bay, and then back to Juneau.

At night, we’d anchor in quiet coves and fjords. We’d feel crowded if we spotted another boat. We’d trap Dungeness crab and spot prawns – deep-water shrimp that taste more like lobster – and maybe fish for halibut.

Bill and I were the most serious fishermen aboard. So naturally, Patti caught the biggest fish. Her halibut, a sort of flounder on steroids, weighed about 40 pounds. I’ve never enjoyed seeing someone else catch a fish more in my life – and that was before Debbie served it with butter sauce. 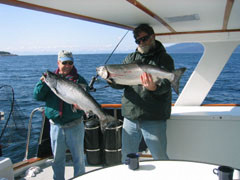 “Fishing and crabbing is important. hunting and gathering is part of the whole Alaska experience,” Debbie said.

Amen. (And if you’re getting the notion that our party traveled on its stomach, you’re pretty perceptive.)

In one cove, we spotted three black bears at three different spots on the beach. First mate Scott explained that in early spring, before the berries and salmon runs arrive, bears rummage on the beach for delicacies such as seaweed. Linda and Scott kayaked toward the closest bear.

As they drifted close to it, Scott, who was in the back of the boat, put down his paddle and picked up a video camera. He shot images of the bear across Linda’s shoulder.

At one point, the bear turned and looked directly at the lens and Linda. How close did they get? “I could hear his claws scratching on the rocks, and I could hear him chewing,” my wife said.

At Warm Spring Bay on Baranof Island, we climbed a narrow plank walkway halfway up the mountain through the dripping rain forest and eased into a natural spring where the water was so hot it took our breath away. And we had the spring to ourselves.

We surprised a porcupine on a trail near the lodge at the entrance to Glacier Bay. It climbed an evergreen right beside the trail and stared dumbly down at us from 12 feet.

Inside Glacier Bay National Park, we saw snow-white mountain goats on a rock face and a raucous colony of Steller sea lions. We saw tiny and sometimes elusive puffins and, of course, glaciers. The Muir Glacier, named for early explorer John Muir, is perhaps the best known.

Debbie and Scott gathered hunks of ice from the water below a glacier, snagging the basketball-size pieces with a fish net. We cooled fish on glacier ice, and also learned the ice makes a great cocktail.

Boat traffic in Glacier Bay is carefully regulated. Geoff’s permit required that we be out May 15. But the scenery and wildlife is stunning outside the park, too. Geoff said a deep fjord called Tracy Arm is even more beautiful.

As our trip drew to a close, Bill and I trolled for king salmon, which is slow work. Geoff explained that the average is about 10 hours of trolling per rod per salmon. With two rods out, we didn’t get a bite the first day. Our boat mates gradually drifted off to their paperbacks as we trolled and watched the eagles and otters, the whales and sea lions.

Two hours into the second day – after 10 hours, almost to the minute – I got a strike. As Bill 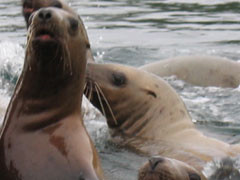 was reeling in his bait to make room for me to play my fish, he got a strike. Geoff seemed stunned to get a double hookup – and positively poleaxed when we landed them both.

That night, our last in Alaska, passengers and crew toasted the trip in the dining room of the historic Baranof Hotel in Juneau over a single filet from my catch.

So how big was it?

Geoff said my salmon, the larger by a sliver, weighed about 30 pounds. I would have guessed a few pounds less, but hey, you don’t argue with the captain.

In May, temperatures varied from the high 30s at night to 50-plus in the daytime. It’s warmer during summer. It dripped and drizzled a bit every day, but there was plenty of sunshine, too. Dress in layers – fleece is your friend and take gloves, long underwear and a cap to cover your ears. Rain gear is a must, and inexpensive rubber pull-on boots are ideal for going ashore.

A smaller ship, like the 96-foot Alaskan Song, can put you closer to Alaska’s natural wonders than can a large cruise liner. And your agenda is more flexible: The Alaskan Song carries two kayaks – allowing you to get truly close to sites such as the icebergs at Tracy Arm. Steller sea lions call this rocky island in Glacier Bay home. Whales are the wildlife stars, but you’ll also see eagles, orcas, otters, mountain goats and elusive puffins. The Alaskan Song anchors in coves where you can fish. See Norwood’s catch: www.charlotte.com/